Influence is a term that gets tossed around a lot today with the growing impact of social media on everything we do in life. Influence can come in all different forms, and it’s not just about free sneakers. People obviously influence each other but let’s not forget why we’re all here — the sneakers. Sneakers can influence design, fashion trends, trends in sports and then some. With that said, take a look at the The 30 Most Influential Sneakers of All Time. 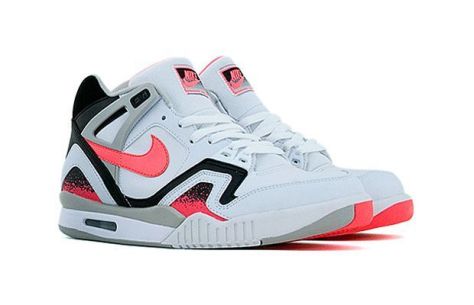 Bright colors and flash were never a part of tennis until Andre Agassi took to the court in the Air Tech Challenge II. Agassi’s trainers not only changed the game of tennis but they also changed the sneaker game. The bright colors, splashy graphics and rockstar mentality has continued to be big part of tennis sneakers to this day.
29. Osiris D3

Skate shoes were going to be bulky? OK then, Osiris could play that game. The D3 was the signature model of Dave Mayhew, and it was the fattest, most tech-packed skate shoe ever. It was almost a practical joke – but it caught on. Oops.
28. Air Jordan IV

Where do you even begin with the Air Jordan IV. Plastic mesh on the side panel, an exaggerated tongue that seems to be designed as much for off the court as on, plastic reinforced eyelets, an extended heel tab to pull the shoes on and off, and that’s just the start of how the Jordan IV changed the game. Not to mention off the court, the Air Jordan IV became an icon on the big screen, solidifying it as one of the coolest sneakers ever.
27. Air Jordan XI

Patent leather on a basketball sneaker? Tinker Hatfield is crazy for this one. What had never been done before influenced an entire decade of popularity for patent finishes. Today, you can find patent as a regular part of any design process, not to mention on the sneakers seen on the streets daily. The Air Jordan XI still has a following of fans and imitators nearly two decades after its initial release.